a town in the middle western sector

Hanson and it's hiking trails are in the area of the middle western sector. This being an inland town, more challenging to find and of the more rural of suburban towns surrounding Boston.

The main highways through this town are route 14 which runs horizontally across the northern portion of town.

Route 27 runs across the southern portion and route 58 runs
north to south.

None of these routes run directly off route 3 but can be accessed by route 18.

Hanson is one of the younger towns in the south shore.

It's early history is largely comprised

of the towns it had formerly been part

A brief history of Hanson

The area that is now called Hanson became the West Parish of Pembroke. Some time in 1746 the question of whether this Western Parish should separate from the town of Pembroke first came up for consideration. It was voted against.

One of the problems with this western parish separating from the eastern one, was a dispute about where the
boundary line between the two was.

Committees were appointed to establish the line without much success as it led to controversy. Finally in 1811 there were agents selected to represent the two parishes that were able to adjust the bounds and these were approved by all.

By february of 1819 it was once again voted whether to
separate and become incorporated. This happened the following February in 1820.

The town takes it's name from Alexander Conte Hanson. Hanson was labeled an extreme Federalist. He published a newspaper called the Federal Republican which he used to broadcast his views on the newly declared war of 1812.

His views angered many to the point of causing a riot which was named the Baltimore Riot of 1812.  A mob decided to destroy his office and press. Hanson then relocated and reissued the article.

The mob once again found him but this time he had armed associates in his company. The crowd was fired upon killing one person. Hanson and his associates were escorted to jail (protective custody).

The mob gained possession of the jail and beat Hanson
leaving him for dead. He did in fact survive and moved his paper again and continued publishing without incident.

A year later as the war became unfavorable, he ran as a representative in Congress til he resigned in 1816. He then served as a senator filling a vacancy of a senator that had resigned.

All of this happened in Maryland. What did the history of a senator and publisher in Maryland have to do with a small town in Massachusetts?

Was it respect and admiration of someone who showed conviction for their beliefs? The decision to honor this senator came from influence by Thomas Hobart who was the agent that helped in incorporating the town.

Like most towns on the south shore, Hanson had evidence of Indian (Native American) influence. Early roads were of Indian
original. One of these paths was called Bridgewater Path. This lead from Duxbury to Bridgewater.

It doesn't seem to be known who the first settler of Hanson was. As early as 1679 a James Bishop lived on the Indian Head River.
William Tubbs was in the area in 1684 and granted land from the Major's purchase.

Early industry was farming and lumbering at saw mills. Later in the nineteenth century would come cranberry cultivation which
continues to this day.

The Hiking Trails of Hanson 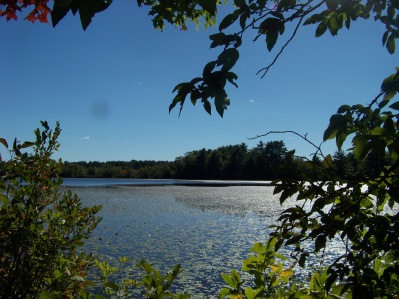 Miles of hiking trails around ponds, though forest and the open space of cranberry bogs and a cedar swamp.

The Indian Crossway is a historical passageway used by the early Native Americans to cross through the Burrage Pond and the Cedar Swamp above it. This section of trail is part of the Bay Circuit Trail. 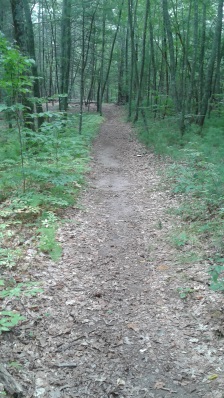 A small network of trails along

scenic views of that river and

connect to a larger system of trails in neighboring towns. 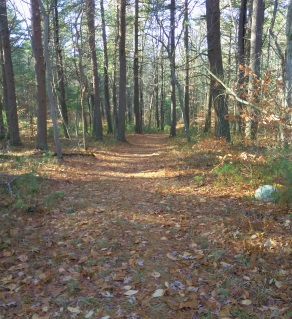 Just around the corner is the

spots along the Wampatuck Pond.